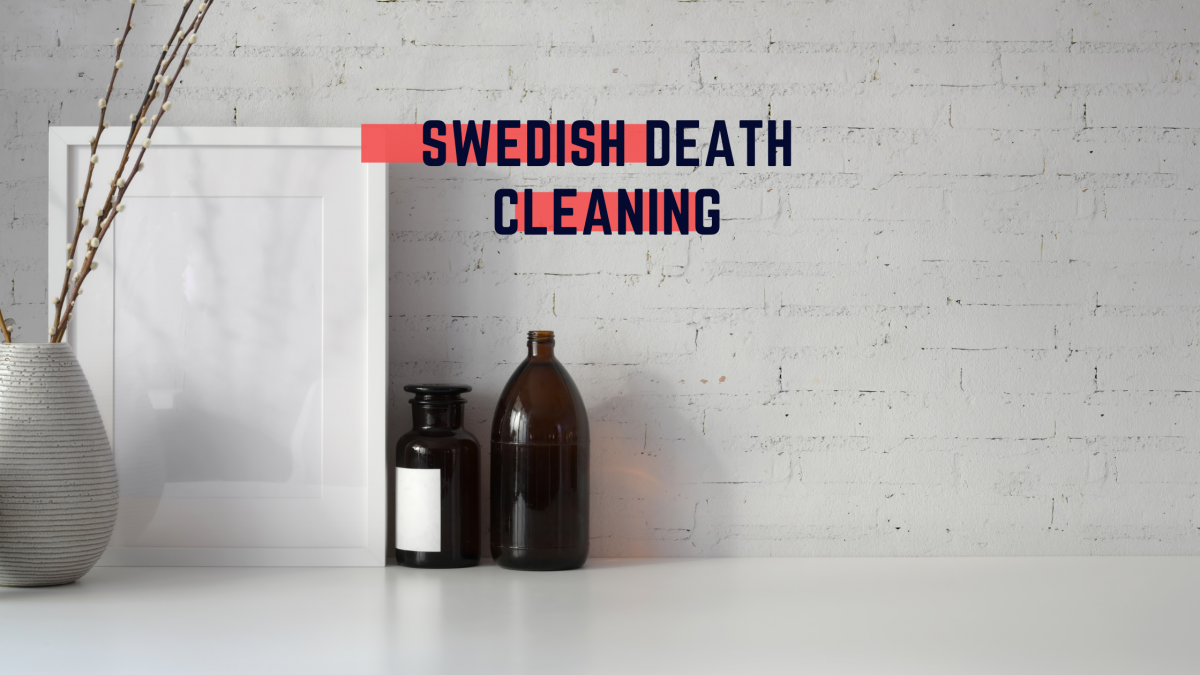 ‘Swedish death cleaning’ is the sort of phrase that leaves you wanting to know more. Here’s a quick look at the Swedish art of death cleaning, with some tips if you’re thinking about getting involved yourself.

What is Swedish death cleaning?

The Swedish concept of döstädning, or death cleaning, came to widespread attention with the release of Margareta Magnusson’s book The Gentle Art of Swedish Death Cleaning.

Over the course of our lives, we accumulate a lot of possessions and clutter. When we die, those possessions are left behind, and our loved ones have to do the emotionally difficult work of sorting through them, deciding what to keep and what to throw away.

Essentially, the idea behind death cleaning is this: what if we get rid of the unnecessary things we’ve accumulated while we’re still alive? That way, we can live in less cluttered surroundings, and sorting through our things will be a much less daunting task for our loved ones when we’ve passed on.

We can do this by going through all our possessions, throwing or giving away the things we don’t need, and keeping only what we want in our lives, and what people might want to inherit from us.

If you’re interested in doing some decluttering yourself, here are a few tips on how to do Swedish death cleaning in your own home.

Finally, bear yourself in mind while you’re working through your possessions. You may be thinking about the convenience of those who will inherit from you, but you’re still a living person and your comfort is important as well. Don’t feel you have to get rid of anything you genuinely want to keep in your life.

There are few, if any, people interested in modern art that will not recognise the name Salvador Dali. Now, nearly thirty years after his death, he is considered one of the most important and influential artists of the 20th Century and is lauded for revolutionising the way we think about painting and art. In his paintings, the human body figures extensively and was used over and over again in a variety of innovative ways. Here we take a look at some of his most important anatomical art, and consider how and why Dali used the human form so much in his work.

As we shall see below, the anatomy as represented visually by Dali was heavily influenced by the medical and scientific thinking of the day, and the morbid fascination brought on by the horrors of World War II, and later the atomic age.

All images courtesy of WikiArt.org

Dali was fascinated with psychoanalysis and the ideas of Sigmund Freud, arguing that it was he who discovered that the human body ‘is nowadays full of secret drawers that only psychoanalysis is capable to open.’ This idea is realised in Dali’s painting The Anthropomorphic Cabinet, where the famous ancient sculpture Venus de Milo was adapted to become a human chest of drawers, or perhaps more accurately in terms of Dali’s art, a cabinet was adapted to take on a human form. This painting was preceded by Dali’s similarly themed Atmospheric Chair, in which abstract, but possibly human, shapes emerge from a cabinet.

Salvador Dali often seemed to use the human form and its distortions to reflect on the important contemporary issues of his time. Soft Construction with Boiled Beans seems to be one such painting. A commentary on the horrors and difficulties of the Spanish Civil War, in which Dali and many of his friends found themselves caught up, the painting attempts to visualise the destruction of the conflict by creating an equally monstrous human form. Dali himself declared that the diabolical head displayed in the painting was inspired by Francisco Goya’s painting Saturn Devouring His Son.

One of Dali’s more famous paintings, Metamorphosis of Narcissus plays with the idea of ego, self-love and the Ancient Greek myth from which narcissism derives its name. The story revolves around Narcissus falling in love with his own reflection in a lake and eventually being immortalised by the Gods in the form of a flower. In Dali’s painting, the human form is contrasted with a similarly shaped rock formation that can also be easily interpreted as a stony hand from which a flower grows. The painting had a great impact, with it being shown to Freud himself, and with Dali’s own secretary, the photographer and author Robert Descharnes, arguing that it meant a great deal to the artist as well.

Another Dali painting inspired by the brutalities of war, The Face of War was finished between the end of the Spanish Civil War and the start of the Second World War. It portrays a decaying face, perhaps that of a corpse, that contains identical faces in its eye sockets and mouth. These smaller faces also contain the same face in their eyes and mouth, suggesting that this process goes on forever in an infinite regress. On the topic of the painting, Dali wrote in his Diary: ‘Not a single minute of my life passes without the sublime Catholic, apostolic, and Roman spectre of death accompanying me even in the least important of my most subtle and capricious fantasies.’

As one of Dali’s later paintings, Galatea of the Spheres reconciles Dali’s unique surrealist style with the new science and ideas emerging in the middle of the 20th Century. Fascinated by the atom and nuclear physics in the wake of the first dropping of the atomic bomb in 1945, Dali sought to create a piece of art that reflected the idea that the entire universe was made up of atoms, between which there was a great deal of space or emptiness, and created this portrait of his wife in response. Also influenced by classical mythology, the painting appears to be one of Dali’s more straightforward to interpret, but is no less impressive for the fact.

The term ‘morbidly fascinating’ is one that we use often and apply to a great many things – both to people and to phenomena. It’s probably also the most succinct and suitable description available for four of our favourite museums.

The Hunterian, the Morbid Anatomy Museum, Bodyworlds and the Museum of Mummies all tackle the issue of death in a different way – whether it’s in terms of preservation techniques, anatomy or artistic representation – and are some of the most interesting and perhaps controversial museums in the world.

While many of the exhibitions may not be to everyone’s taste, they provide us with an opportunity to face death and to recognise the fact of human mortality in a visceral and unflinching manner, while often teaching us a great deal about the human body, societal attitudes towards death and our own ability to talk about the issue. Here we take a look at what makes each of the four museums worthy of a visit.

Often referred to as ‘the weirdest museum in London’, The Hunterian is based in the Royal College of Surgeons near Holborn and contains a fascinating array of anatomical specimens. Centred around John Hunter’s large collection of skeletons, skulls, organs and diseased body parts, over the years the museum has expanded its collection to include surgical instruments and anatomy tables. It has developed a large and loyal following, most of whom appreciate the free entry and weird and wonderful exhibitions always on offer.

While it has its origins in the government purchase of the famous scientist and surgeon’s specimens in 1799, the Hunterian has made a number of important acquisitions over its lifetime, most notably in its odontological department and with Richard Owen’s natural history collections. It is home to the skeleton of the famous ‘Irish giant’ and the historically important Evelyn tables and the museum has committed to the development and renovation of the building in which it is housed.

In May 2017, the Hunterian closed for a three year period in order to perform necessary repairs and modernisation works. It is scheduled to reopen in 2020.

Located in Brooklyn, New York, the Morbid Anatomy Museum was the brainchild of Joanna Ebenstein and Tracy Hurley Martin, two individuals who discovered they shared a passion for the macabre and morbid and decided to act on it.

While the idea was first realised as a blog and then a library, it finally became a fully-fledged museum space in 2014, complete with lecture space, café and shop. Dedicated to the strange and surreal, the museum houses a collection of death related curiosities and exhibits ranging from Victorian taxidermy and preserved insects to antique medical contraptions.

Though going to visit a museum exhibition curated by someone commonly referred to as ‘Dr. Death’ may not seem like everyone’s idea of a great day out, the Body Worlds permanent exhibition in Berlin’s Menschen Museum has attracted an incredible number of visitors over the last few years.

The museum has attracted its fair share of controversy (it faced a court battle over the legality of its displays in 2014), but it has also become one of the most famous anatomical exhibitions ever, bringing enthusiasts to Berlin from all over the world.

Consisting of 20 human bodies, each posed in a different position and performing various activities and tasks, Body Worlds is famous for the way each of these models has been skinned and preserved, revealing all of the internal detail we never get to see, from the capillary structure to the musculature. While not for the faint-hearted, Body Worlds provides us with a fascinating glimpse inside the human body, both in life and death.

With over 100 mummified bodies on permanent display, the Museum of Mummies in Guanajuato, Mexico, is often labelled the most morbid museum in the world. While some minor embalming techniques were used to prepare the bodies, it’s actually the climate of the region that causes most of the mummification process, meaning the museum doesn’t have to go far to find its exhibits. In fact, nearly all of the mummies on display have been disinterred from the cemetery next to the museum and include a diverse array of individuals, including infants, Inquisition victims and criminals.